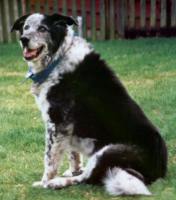 On September 14, 2002, Shane E. Pooper was released from the bonds of infirmity and old age.  Now free to romp and bound without the impediments wrought upon him in his seniority, he is mourned by all who knew him, and particularly his immediate family Mark Miller, Nancy Friday, Emerald, and Carley.

When Shane’s time came we believe he chose to go in the most sensitive way he knew.  While Mark and Nancy were away on vacation, Shane developed some mobility troubles which prompted his caretakers to transport him to his vet.  Having spent a few days rallying and showing signs of a possible recovery, his enormous inner strength eventually flagged.  Curtailing their visit in New England, Mark and Nancy hastened home to find an ailing and tenacious boy who seemed to be clinging to life only long enough to see his Mom and Dad one more time.  After a proper farewell, he was freed from his pain.

Shane was known for his good humor and temperate disposition, tolerant of an array of tiny irritants and indignities, he never showed impatience or contempt.  As a younger dog, he was known to corner “threatening” individuals but never, in 16 years, did he bite another living soul. He was described by his admirers as “soulful” and “a good boy.”

Among Shane’s claims to fame are: a lifetime of unsolicited praise for his stunning good looks, his especially sweet demeanor, his lifelong passion for a leash-free “country dog lifestyle”, and a chance encounter with the lead singer of Blues Traveler, John Popper.  Even though Shane was barking insistently, Mr. Popper was eager to gain Shane’s affection and promptly laid his imposing frame prostrate on the ground in front of Shane to be covered in kisses.  Shane had that effect on  people.  They wanted him to like them.

As the elder statesman, and last remaining member of the first generation of Miller/Friday four-leggeds, Shane distinguished himself through his joy of ball play, his love of life and walks by Lake Washington, and his uncanny ability to bear the burdens laid upon him by the scourge of time.

He will be sorely missed.